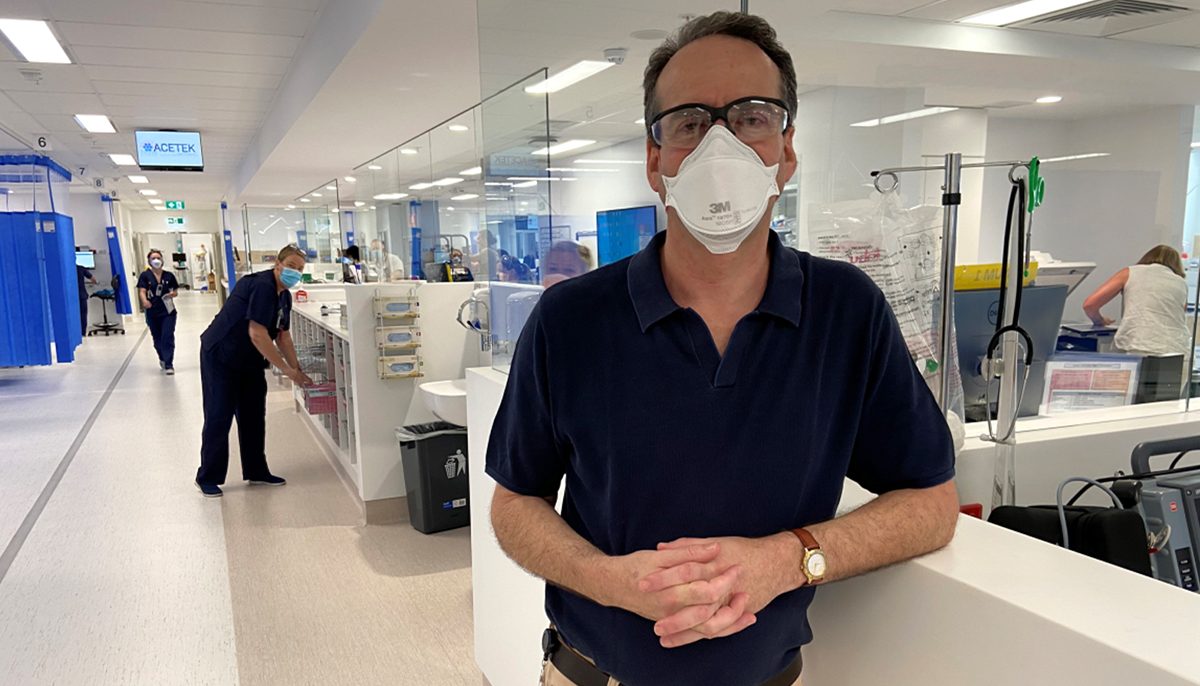 Network Director of Emergency Medicine Dr Alan Tankel at Coffs Harbour Health Campus, a hospital that has continued to deliver quality care despite the challenges of winter illnesses and a pandemic.

The report reflects another busy period of complex presentations and admissions to our hospitals and significant numbers of staff furloughed.

“Our staff continue to work exceptionally hard to provide high quality care to our patients despite the ongoing challenges the healthcare system is experiencing,” he said.

“Our emergency departments continued to see high presentations throughout the Omicron wave of COVID-19, flu season and a rise in other winter illnesses.”

The majority of patients (69.5 per cent) started their treatment on time, which is better than the state-wide average of 65.6 per cent.

Almost eight in 10 patients (79.3 per cent) were transferred from ambulances to ED staff within the 30-minute benchmark, also better than the state average of 74.8 per cent.

About seven in 10 patients (68.5 per cent) left Mid North Coast EDs within four hours from arrival, compared with the state-wide average of 57.4 per cent.

Throughout the July to September 2022 quarter, the District performed 2,576 elective surgery procedures, with almost all urgent elective procedures (99.6 per cent) performed on time.

Any patients who feel their condition has deteriorated while waiting for their procedure are encouraged to contact their treating doctor for a clinical review and they can be placed in a higher urgency category if required.

The 2022-23 budget for Mid North Coast Local Health District is more than $775 million, an increase of more than $28 million, or 3.7 per cent more, on the previous year’s budget. Between mid-2012 and mid-2022, MNCLHD increased its workforce by an additional 1,192 full-time equivalent staff – an increase of 43.7 per cent including 145 more doctors, 558 more nurses and midwives and 88 more allied health staff.

The NSW Government is investing a record $33 billion in health as part of the 2022-23 NSW Budget, including almost $900 million for the ongoing COVID-19 response.

The NSW Government also announced the largest workforce boost in the nation’s history in the 2022-23 Budget with a $4.5 billion investment over four years for 10,148 full-time equivalent (FTE) staff to hospitals and health services across NSW.

In addition, the NSW Government is also incentivising hard-to-fill, critical roles in hospitals and health facilities with an $883 million investment targeted at recruiting and retaining staff in regional, rural and remote areas.

Coffs Harbour Health Campus had 10,916 ED attendances in July to September 2022. The majority of patients (75.4 per cent) were transferred from ambulance to ED staff within the 30-minute benchmark. There were 743 elective surgeries performed, with 99 per cent of urgent elective procedures performed on time.

At Kempsey District Hospital, there were 6,695 ED attendances from July to September 2022. Seven in 10 patients (70.6 per cent) started their treatment on time, with 87 per cent of patients transferred from ambulance to ED staff within 30 minutes. The hospital performed 389 elective surgeries and all urgent elective procedures (100 per cent) were performed on time.

Macksville District Hospital had 3,289 ED attendances during the July to September 2022 quarter. Almost nine in 10 patients (89 per cent) started treatment on time, which is better than the average for hospitals of a similar size in NSW (76.6 per cent). Almost all patients (94.7 per cent) were transferred from the care of paramedics to ED staff within 30 minutes. Throughout the quarter, the hospital performed 259 elective surgeries.

Port Macquarie Base Hospital had 12,477 ED attendances in the July to September 2022 quarter. The majority of patients (65 per cent) started their treatment on time, which is better than the average for hospitals of a similar size in NSW (62.8 per cent). Almost seven in 10 patients (69.2 per cent) left the ED within four hours, which is better than the average for comparable hospitals in NSW (53 per cent). About 77 per cent of patients were transferred from ambulance to ED within 30 minutes. The hospital performed 842 elective surgeries throughout the quarter, with all urgent elective procedures (100 per cent) performed on time.