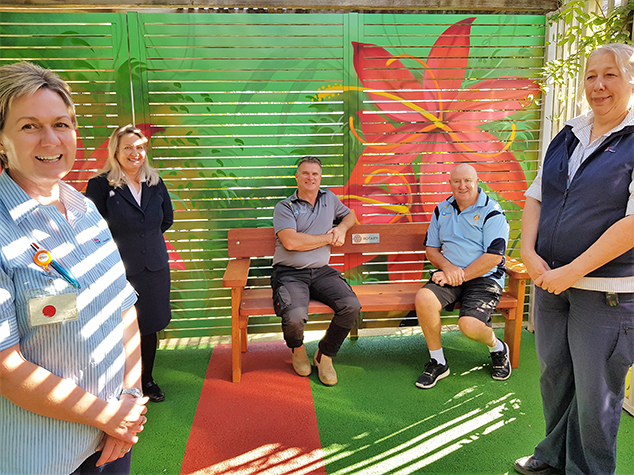 The Rotary Club of Coffs Harbour has funded a major revamp of the dementia courtyard at Coffs Harbour Health Campus.
The $10,000 project has transformed the outdoor space into two vibrant, colourful and safe spaces for patients living with dementia.
Guided by Dementia Australia principles, the Rotary club, a long-time supporter of Coffs Harbour Health Campus, set about transforming the space into two dementia-friendly private courtyards which can be accessed from two dementia-specific rooms in the hospital’s Medical Unit.
Project spokesman and club board member Rob Avery said he couldn’t be happier with the transformation.
“When the hospital asked us to help, it didn’t take the board very long at all to agree,” Mr Avery said.
“Almost every family has a connection to someone with dementia or other similar condition.
“So, when we were asked to help, we all agreed, ‘let’s do it’.”
The club sought the expertise of local businesses and sourced the components locally, where it could.
Local artist Ash Johnston has created three beautiful murals, one of a kookaburra, one of hibiscus flowers and the other a galah amongst native wattle, on the courtyard’s privacy screens. Bench seats from Billabong Garden Furniture have been installed, two interactive boards created by the Coffs Harbour Men’s Shed will be installed in the near future, magnetic interactive weather boards have been placed in each of the dementia rooms, and the soft-fall floor has been revitalised by local painter Jason Durheim.
“Everyone is very happy with the finished project,” Mr Avery said.
Among those delighted with the project’s outcome is Psychogeriatrics Transitional Nurse Practitioner Sandy Everson, who took the idea to Rotary.
“The Rotary Club of Coffs Harbour has been amazing,” Ms Everson said.
“This project was so important, and now that’s it’s completed, it’s going to make a tremendously valued contribution to the wellbeing of our patients with dementia.
“Everyone involved, from the Rotarians, to the artist, our own Charitha Jayakody from Physical Resources, Billabong Garden Furniture and the Men’s Shed… it’s been a labour of love and the outcome is a functional, appropriate resource that truly is a work of art.
“We love it, and we can’t thank our friends from Rotary enough for the difference they have made to the wellbeing of our patients,” Ms Everson said.