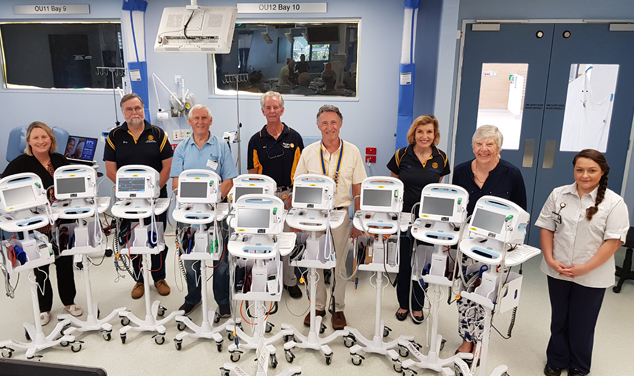 The Rotary Club of Coffs Harbour Daybreak has donated the final monitor, having already contributed four others, to the community partnership project in what has been acknowledged as a world-first in cancer care.

The state-of-the-art monitors, which cost $8,800 each, use wireless technology to record patient observations, such as blood pressure, pulse rate and respiration, to a central, oncology-specific electronic medical records system.

The project has eliminated transcription errors, improved nursing and clinical staff efficiency and provides ‘real time’ data to assist doctors in their decision-making.

MNCCI Nursing and Service Delivery Manager Jill Harrington said the project had been an outstanding success and was only possible because Rotary had come on board to fund the monitor component.

“This project has involved input from technical experts in Asia and the United States, working with our team to deliver what was just an idea four years ago,” Ms Harrington said.

“The vision and technical know-how certainly played a role, but it quite simply could not have happened without the Rotary Club of Coffs Harbour Daybreak taking a lead in partnering with us and bringing other clubs and individuals on board.

“It’s a remarkable feat; a world first and we couldn’t be more grateful for the faith Rotary showed in this project.

“The arrival of the final monitor was an opportunity to bring the various club representatives together with the prostate cancer support group and our team to say well done and, from the bottom of our hearts, thank you.”