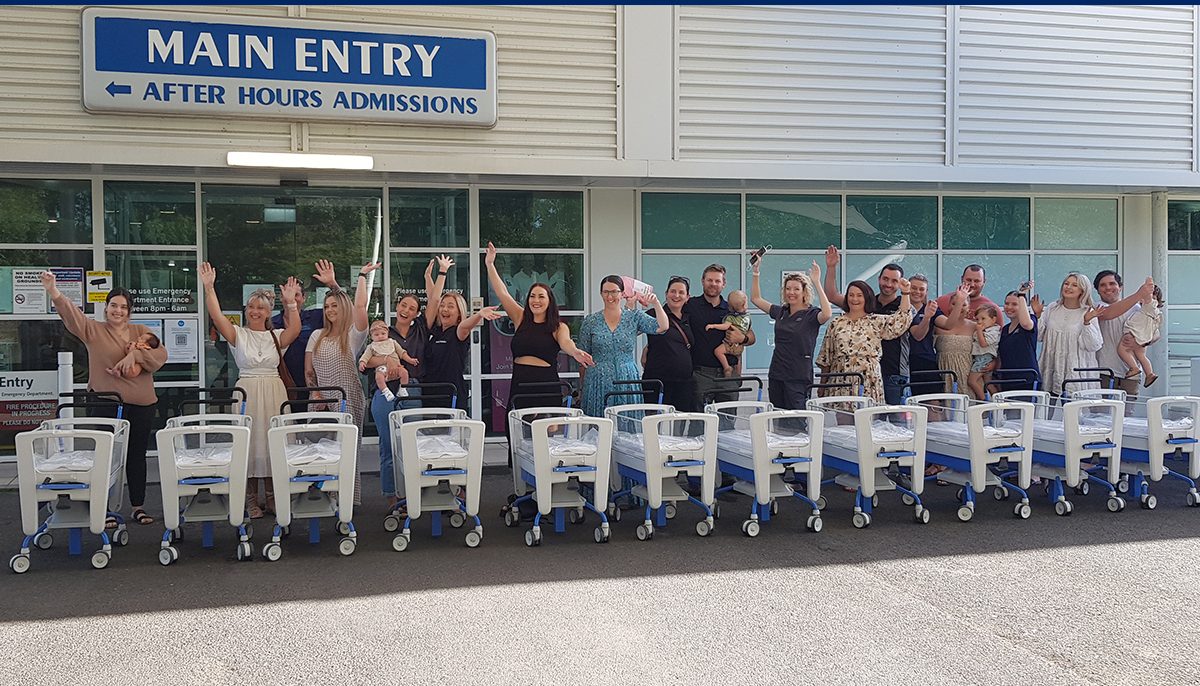 Eleven co-sleeper cots arrived at Port Macquarie Base Hospital after a highly successful community fundraising drive launched by three local mothers. Pictured with the co-sleepers are the generous donors for each cot.

A remarkable fundraising campaign, started by a mum, has delivered more than $52,000 in equipment to Port Macquarie Base Hospital’s Maternity Unit.

Grayce Gerke had no idea she would be the architect of a community fundraiser for the unit when her daughter Maeve arrived by caesarian section last year. But when she learned Maternity had no co-sleeper cots, she decided to do something to change the situation.

Seeking the help of local Instagram blogger Kirsty Minturn and midwife Zita Burt, Grayce launched the fundraiser with the aim of donating three co-sleepers. The bassinets have collapsible sides, making it easier for mums who have had caesarians to access their baby from their bed.

With Kirsty’s social media presence, the goal soon shifted from three co-sleepers to 15, making it easier for all mums, not just caesarian mothers. Within 48 hours, the goal expanded to six special care cots for premature or unwell babies in the Special Care Nursery. Next came eight recliners offering more comfort to mums while feeding their baby, that can also be used by family members. The final tally enabled the fundraisers to add two antenatal examination beds to the list and a hospital-grade breast pump.

Maternity Unit Manager Kym MacCullagh, said she was in awe of Grayce, Zita and Kirsty’s determination and the community’s generosity.

“We have so many people to thank for supporting this campaign, from the businesses and families who sponsored individual items to the many people who simply went online and gave what they could in support of birthing mothers and their babies,” Ms MacCullagh said.

“Grayce, Zita and Kirsty were certainly the driving force, but our community made it a reality.

“Never in our wildest dreams did we think this campaign would exceed $52,000, but it has, and we are forever grateful.”

On Friday, the first of the co-sleepers were presented to the hospital by each cot’s sponsor.

“We were so overwhelmed by the support, and it just goes to show what passion, determination and community spirit can achieve,” Grayce said.